Gyotaku is a Japanese method of printmaking that traditionally utilizes fish, sea creatures or similar subjects as printing “plates” in its process. The literal translation of the word is “fish stone rubbing” and is believed to get its inspiration from Chinese stone rubbings of calligraphy, which eventually gave rise to modern printing.

Gyotaku, or Japanese fish printing, was originally used to record and commemorate a fisherman’s catch.

Eventually, it evolved into an art form, with three different approaches.
Chokusetsu-ho, or the direct style, is the most similar to the original methodology. The fish is cleaned, prepped, supported, and then inked with either water or oil based inks or paints. At this point, dampened Washi (“rice” paper), or one of many other possible substrates like silk, linen or cotton  is applied to the fish, and an image is created by careful hand rubbing or pressing the applied material against the inked surface . The print is carefully removed from the fish, yielding a reverse image. It is allowed to dry , and the eyes are later painted in with brushes. Sometimes color is added to the fish or background with thin washes.

Kansetsu-ho, or indirect printing, is a more painstaking process, and yields very delicate and detailed images. This method involves adhering Washi paper, silk, or other fabric to the fish, with or without the help of rice paste. The ink is applied painstakingly to the silk while it is adhered to the fish with tampos (applicators made of silk wrapped around cotton). Although the detailed patterns and relief of the fish “printing plate” are still offered to the artist through the medium of the silk, the ink does not directly touch the fish. Unlike the Direct method, the finished image is not reversed.  But, like Chokusetsu-ho, the eyes are painted in by brush at a later time.

Tensha-ho, or transfer Gyotaku, is a lesser known and used technique.  It was developed when the objective of the printing was to create the image on a hard surface such as wood, leather, plastic or even the wall of a dwelling. These are situations when it would be impossible to apply the foundation of the work directly to the surface of the inked subject. In Tensha-ho, the subject is prepared and inked as in the direct method.  Then image is then lifted from the subject after placing and pressing a piece of nylon or polyethylene on the ink covered object. The transfer film is then lifted and carefully placed and pressed upon the target surface. In this method, the final image is not reversed as it is in the Direct method. Through the process, the image is reversed a second time, resulting in a right-oriented impression.

Direct prints can be left in the black and white state after printing, with the eyes painted in afterwards, in grayscale. This most closely approximates the original form of Gyotaku, the record of the fisherman’s catch.

Color is usually added to the artistic version of these creations, either by using colored inks directly on the fish, or by adding color to the piece afterwards with transparent layered washes of inks or color mediums.

Finished works can be mounted on scrolls, wet mounted to canvas;  or mounted  to background washi paper, then matted and framed. Frequently, the work includes a red oriental seal, or “chop” and/or some Kanji calligraphy indicating the artist’s name and information, or important subject matter.

Stephen DiCerbo brings the evolving art form of Gyotaku to a new level of fine art. While creating every image, whether it is Chokusetsu-ho style (direct printing) , or Kansetsu-ho style (indirect printing), he takes great efforts to achieve a degree of image detail and eye pleasing composition that surpasses all his previous works.

For more information, or questions about Gyotaku workshops, contact Stephen DiCerbo at (518) 466-7004 or stephen@stormtreestudio.com. 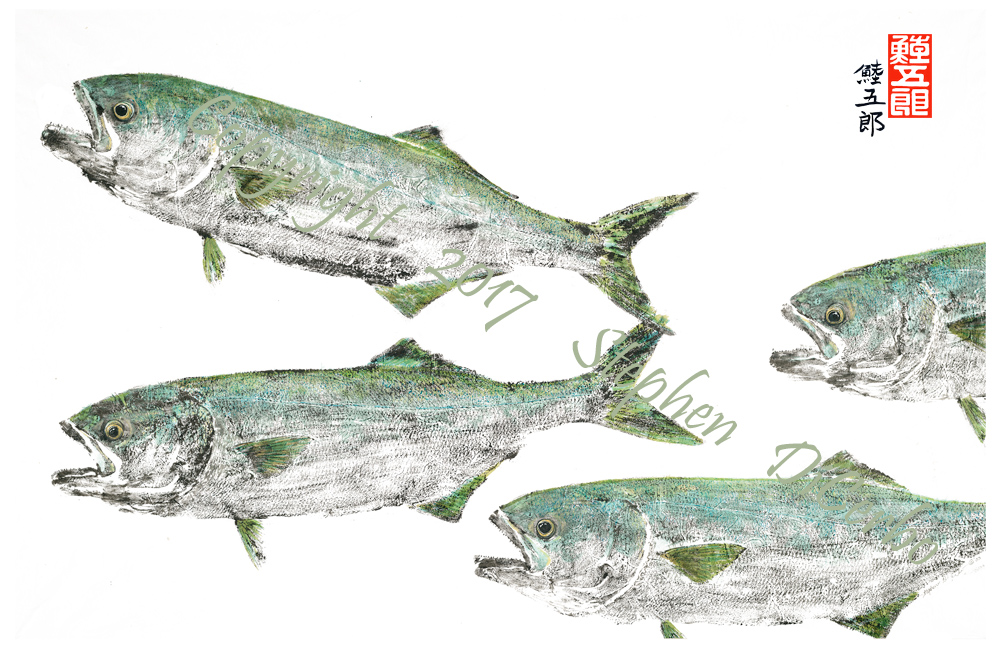 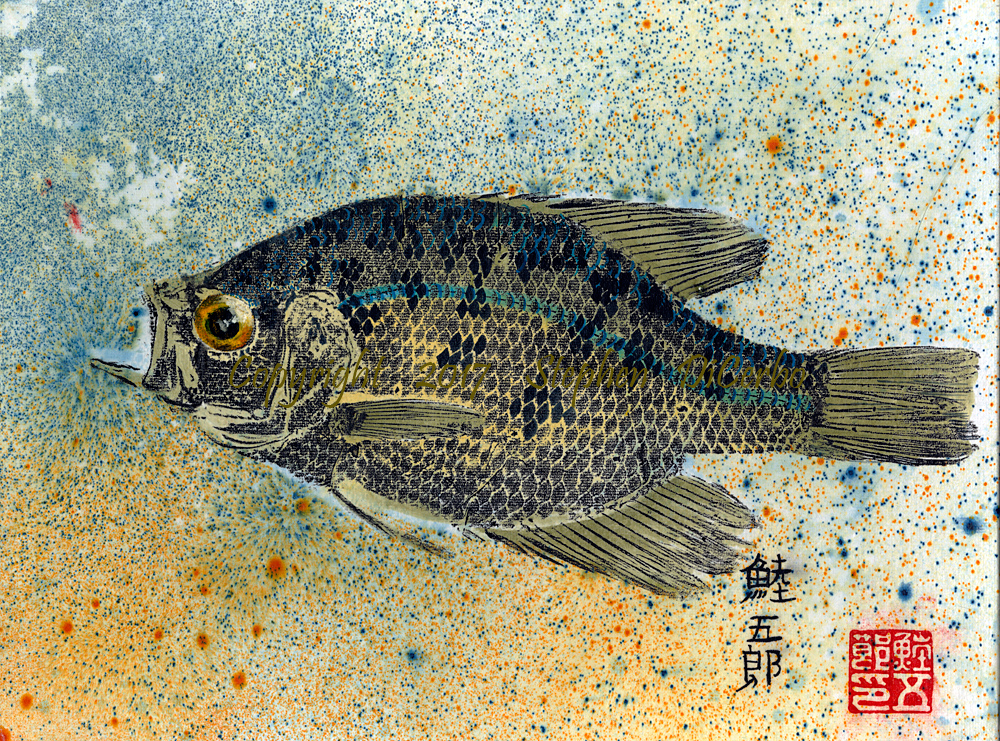 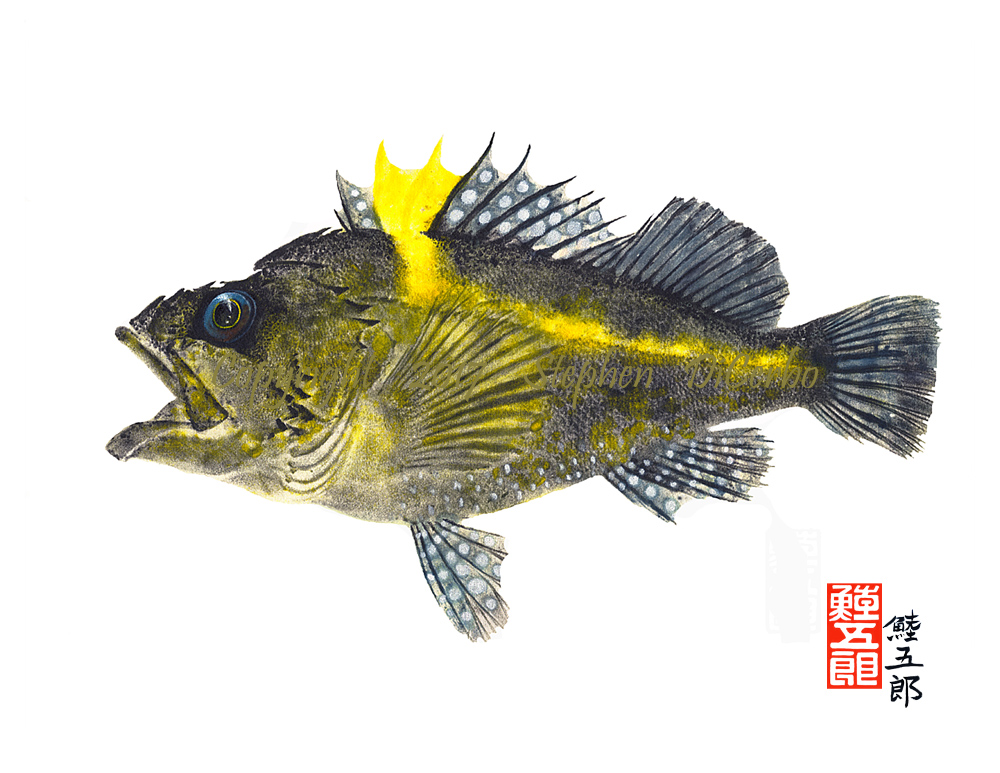 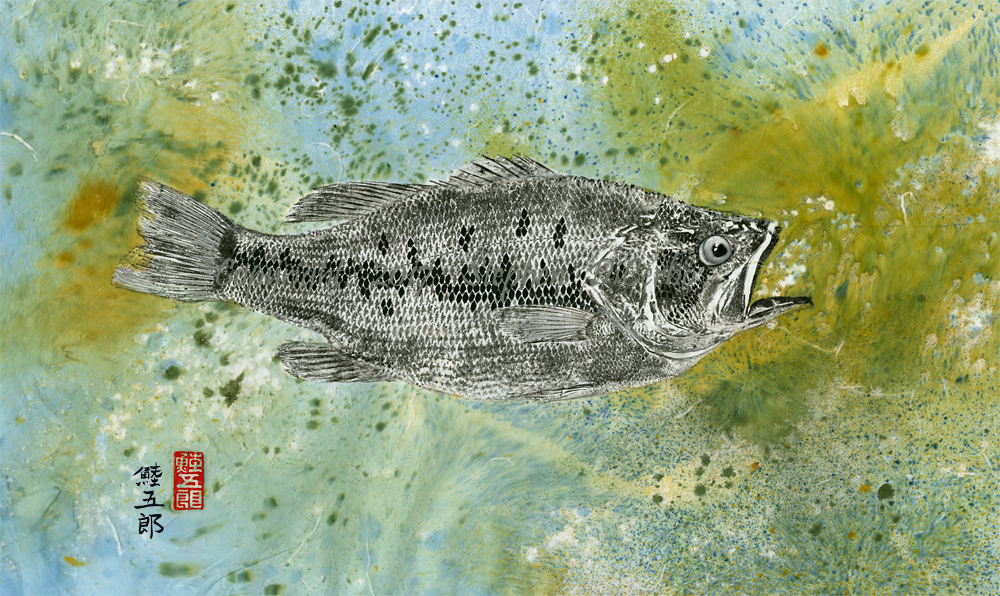 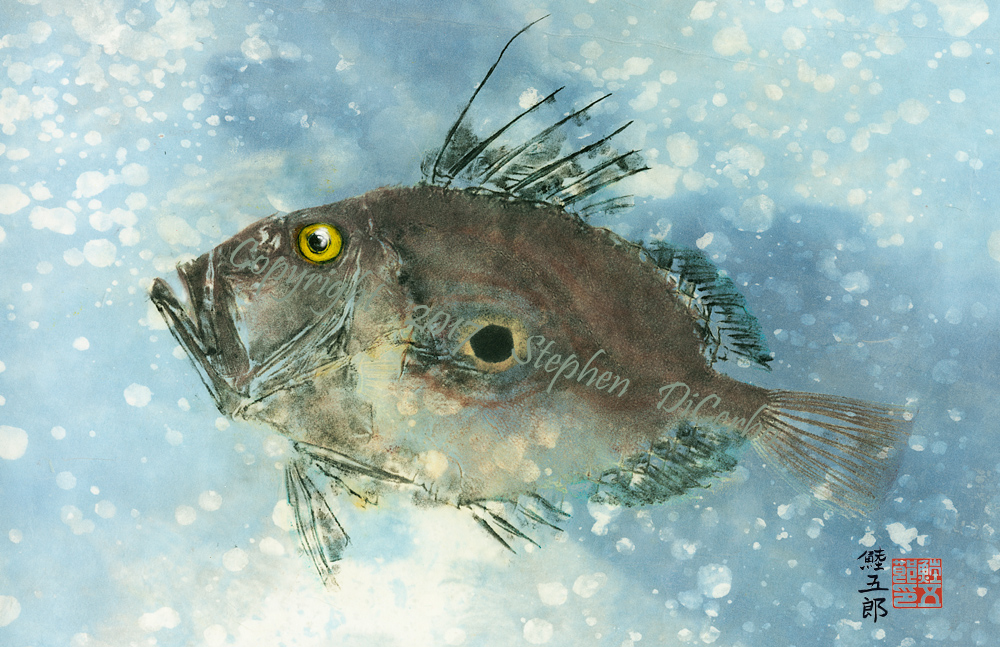 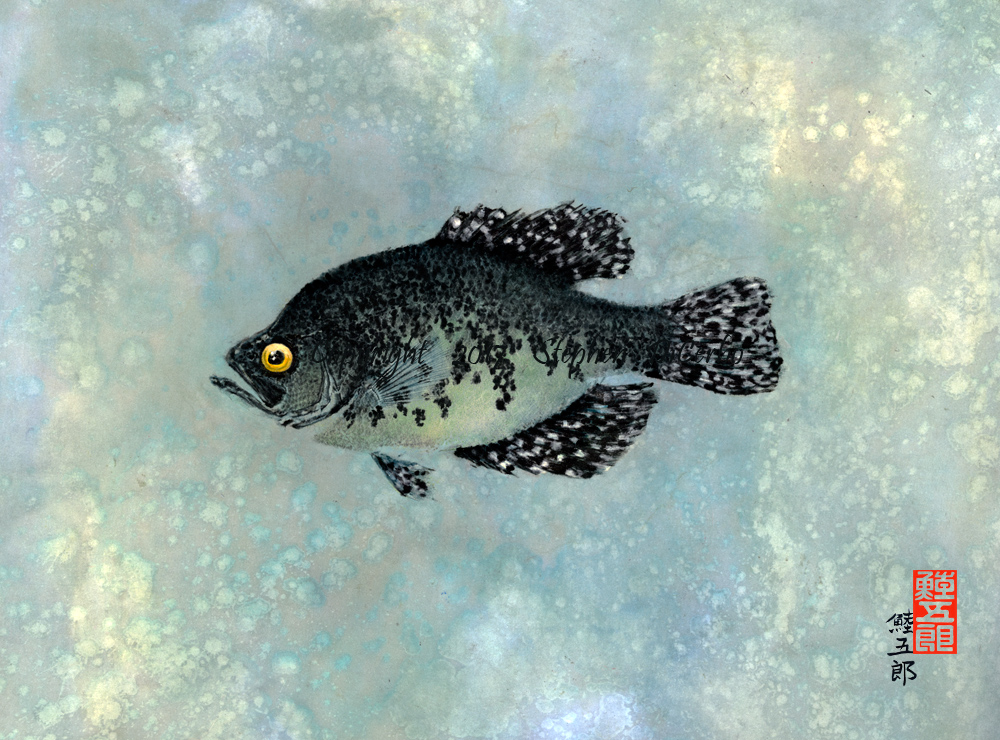 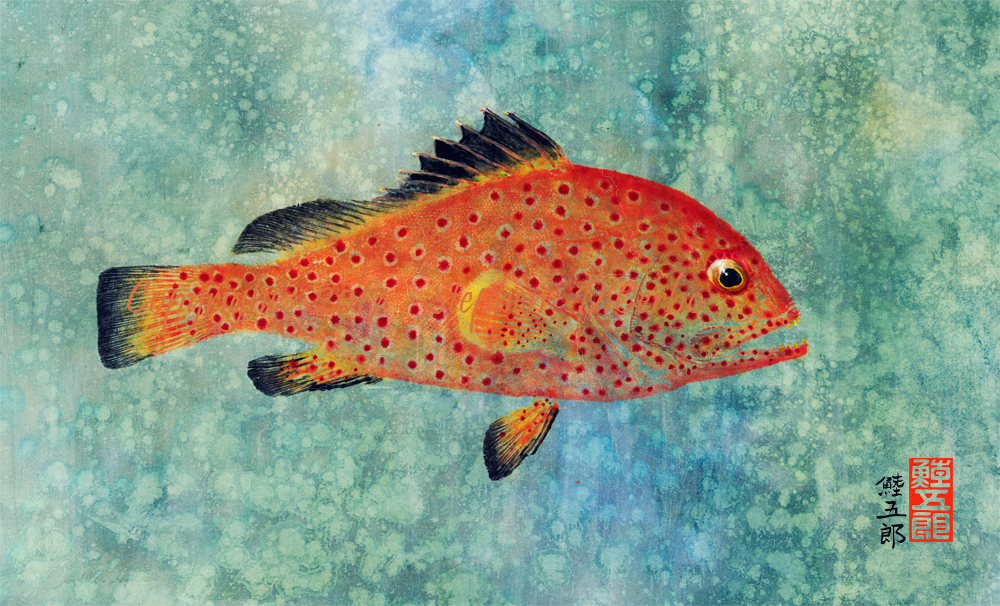 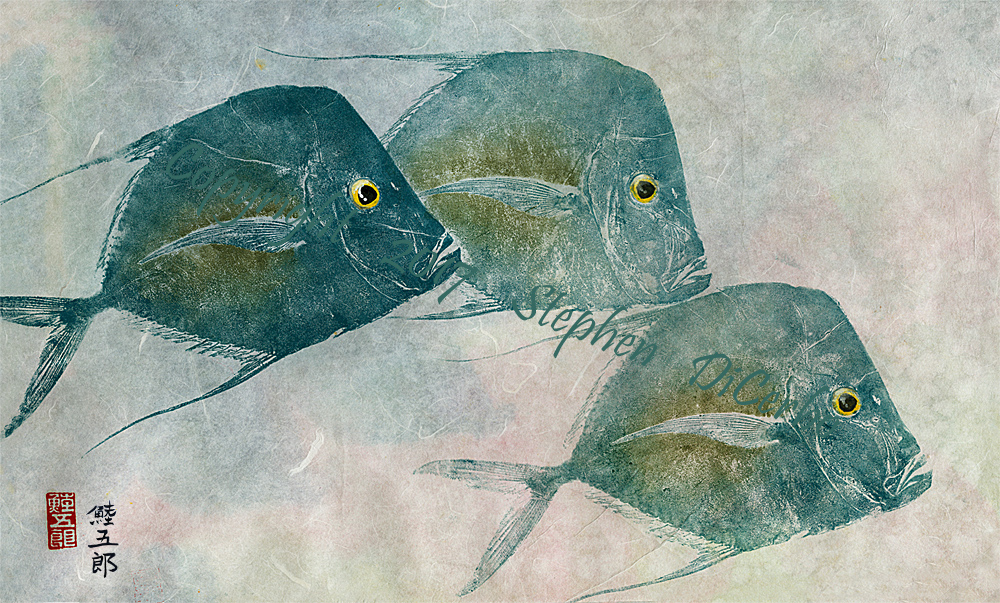 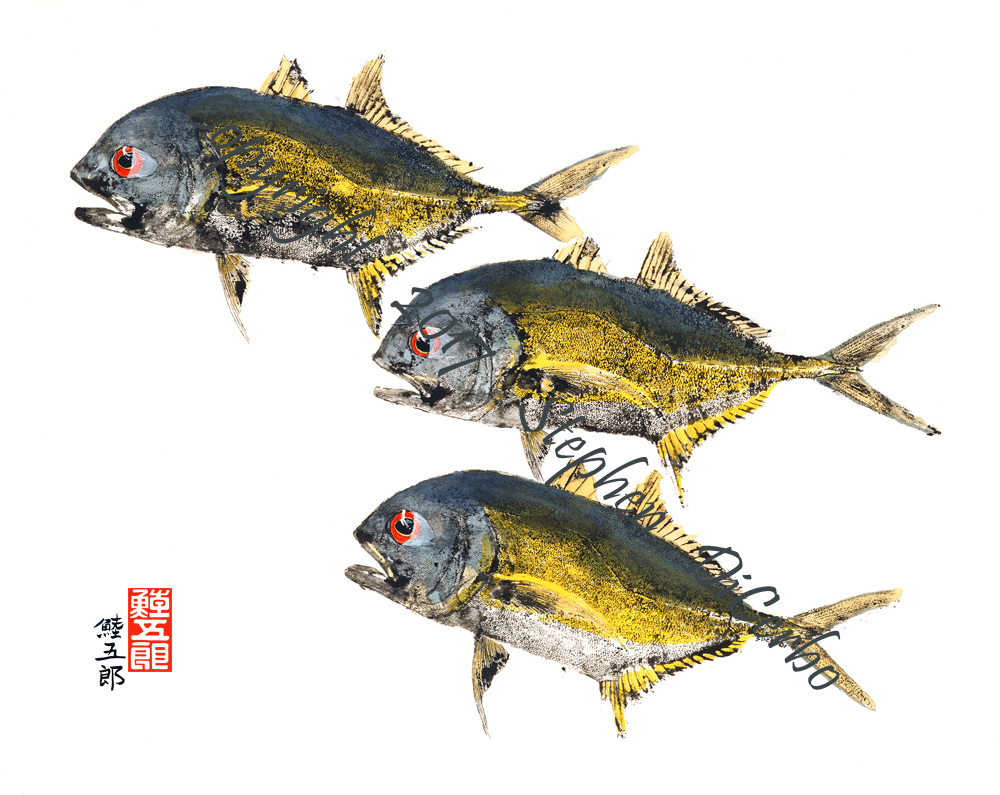